“Life is a game. So fight for survival and see if you’re worth it.” – Mitsuko, Battle Royale

If you play Minecraft, DayZ, H1Z1, or follow certain people on YouTube, chances are you’ve seen the many iterations of the arena combat found in ‘Battle Royale’ or ‘The Hunger Games’. Whether it’s a clearly inspired game mode, like the Survivor GameZ in DayZ, or something a little different, like certain survival-focused versions in Minecraft, it has emerged as something massive.

If you’re unfamiliar with the style, players are thrown into an arena and told to kill each other, the winner’s prize is survival. It has recently been heavily popularised by the book and film series The Hunger Games, a young adult series set in a dystopian future. Previously, Battle Royale took the crown for bringing this style of arena battle to the masses. Both have their own quirks (Battle Royale has a little more luck involved with initial weaponry, whereas The Hunger Games has a number of traps and more environmental dangers), but both are fantastic. This is certainly not the first example of arena combat to remove the undesirables: damnatio ad bestias was a warmup for gladiatorial combat, where criminals and slaves would be tossed into the arena with wild, dangerous animals. To translate this into a game seems pretty obvious, right?

Well, that’s certainly what you’d expect. Multiplayer arena, that allows for stealth, rampant murder, treachery, and more would be fantastic. Despite this, it’s only recently that this idea has become somewhat popular. My first experience with the style was with Minecraft where I played early versions of the Survival Games. Players could run around a mostly generic area, occasionally finding a structure that might contain loot or traps. Since then, the maps have been heavily updated and different versions have been made, such as The Hive’s variant ‘SG: Heroes’ which focuses on survival and loot hoarding, building up to a final huge fight.

A promotional image for the first Survival Games map, made by the now-defunct Team Vareide

Survival games are clearly some of the best ones to build a Battle Royale or The Hunger Games-inspired mode out of. Zombie survival is even better. The games naturally have the feeling of tension when you’re forced to shoot someone and draw attention to yourself, on top of how other seeing other players is often a terrifying experience. To answer a few question about the mode as a whole, I got in touch with the people behind the Survivor GameZ, one of DayZ’s biggest attractions nowadays.

The Survivor GameZ is a tournament where a number of players are thrown together in the zombie-infested land of DayZ. Qualifiers work similarly to the format you’d find in other games using the Hunger Games format, the last man standing wins and moves on to a final match, where the rules change, and each player has a partner. A major difference between this and, for example, the Survival Games (very confusing, isn’t it?) is that the Survivor GameZ has been built up as a spectator sport. The fifth Survivor GameZ finished just last week, hitting 192,000 concurrent viewers, something I don’t think anyone could have guessed at. For some context, there are only 153,000 viewers currently watching the official League of Legends Champion Series in Europe at the time of writing. 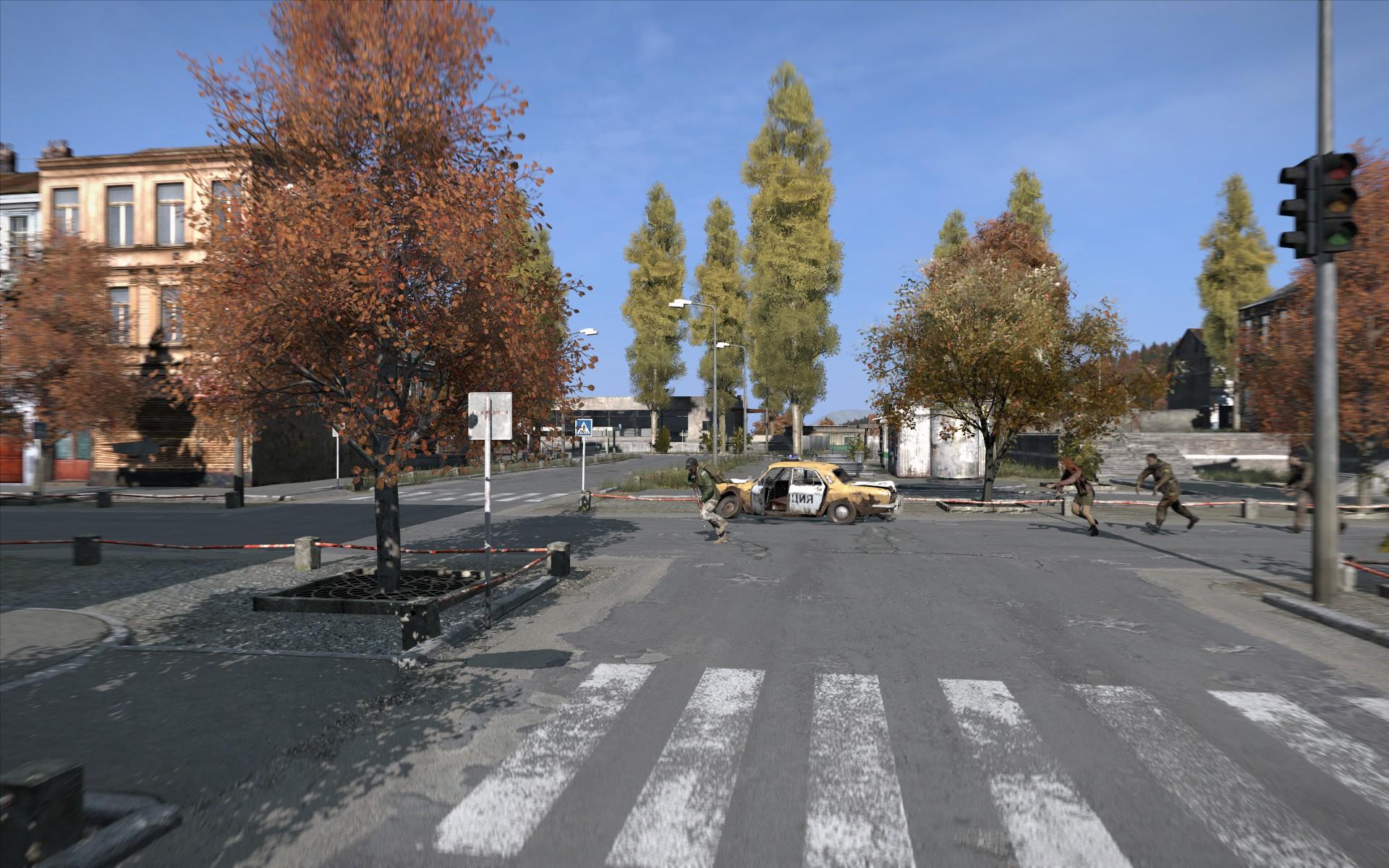 The Survivor GameZ has been brought over to DayZ standalone, meaning it’s no longer a mod of a mod

The Survivor GameZ mode was mostly inspired by The Hunger Games, Brian Hicks, one of the main developers behind the mode, has said this about the origin of the mode and its development:

“The concept was all Jordan (Tayer), he said “We need to make the Hunger Games happen in DayZ, it’s perfect.” I was reluctant, considering how much work vs reward it looked to entail. But when I realized the whole of the DayZ Twitch community had already been hyped up, and that if I didnt get serious about making this happen – we were going to fall on our faces, I started getting the ball rolling on how it would be done. Later on the execution and how it was designed ended up being done by myself – and even later on we started to adopt suggestions from competitors, like Chris (Sacriel) who suggested the phases and their transitions. These days I mostly focus on the tech and admining side. This SGZ (SGZ V) a lot of the “level design” was done by Jordan.

Jordan has always been the passion, pushing me to make things happen faster, or bigger, etc.

Eventually he pushes hard enough, and gets me moving.”

In the same style as the inspiring works, the Survivor GameZ features moving zones, forcing players to travel across the land, hopefully causing fights. The tournaments went on a hiatus during the mode’s transition from a part of the DayZ mod to the standalone game, allowing the people behind it to really up the quality for streaming capability. It shows too, the record high concurrent viewers in the fifth Survivor GameZ was over triple their previous record. TotalBiscuit tweeted about it, calling even watching the mode “compelling”.

For gaming to improve, an important aspect is evolution. Developers and designers take existing ideas, updating and improving them based on their creative flair and mechanical skills. In this case, the team behind the Survivor GameZ are evolving the arena combat from other forms of media and making it an interactive experience. The improvements that the team are making to camera work and the dedicated casters make it clear that the team behind the Survivor GameZ want to really make this style popular, the response is making it clear that it’s working. The Survivor GameZ is a clear example of how evolution is an especially useful tool in creating something enjoyable, without having to jump into something completely new.

The really interesting thing about these modes is that we haven’t yet seen anything solely focusing on the idea. H1Z1 has an official ‘Battle Royale’ game mode already, and getting into a game requires some patience due to the popularity of it. It’s not really the core game, however, we’ve never had anything fully fleshed out using the style. While the team being the Survivor GameZ “dream” of it becoming something like that in the future, that depends on a lot of factors. We’ve had full games based on multiplayer ideas, such as The Ship or more recently Evolve. The style found in the Survival Games in Minecraft or the Survivor GameZ in DayZ would really suit it, there are clearly some talented folks in both sides.

So why don’t we have it? I’d argue it’s a similar reason to why we didn’t have open-world survival, when now we have it constantly. We haven’t had the evidence to show it works, but once we know it’s possible and as fun as it sounds, we get developers flocking to it. After Minecraft, we had open-world survival become huge where previously it was minimal. After the original DayZ mod, had announcements coming out everywhere for new open-world zombie survival. The ‘Battle Royale’/’Hunger Games’ style I think will be the next iteration of this. The groups behind these modes are those with the creativity, knowledge, and the guts to try and bring something like the survival arena combat to games.

While we may never see a good official adaptation of ‘Battle Royale’ for gamers, this is where the survival battle arena games will be born and forged. The future of these modes lies in how well they’re made and used. Turning the Survivor GameZ into this spectator sport is exactly how to make the mode popular and really raise the attention of others into making this mode something huge. How knows, maybe we’ll see some fantastic, creative uses of the theme as a spectator sport. Hunger Games sponsors, entire stories surrounding the motivations, even popular participants, forming rivalries. We’ve seen the tip of the iceberg: who knows what could be done with the full creative potential from the developers if they worked on it full-time.