Though fall’s highly-anticipated next-gen hardware and software might be right around the corner for anxious gamers, Bag of Games takes a closer look at this month’s wealth of must-have releases as summer meets its inevitable conclusion. 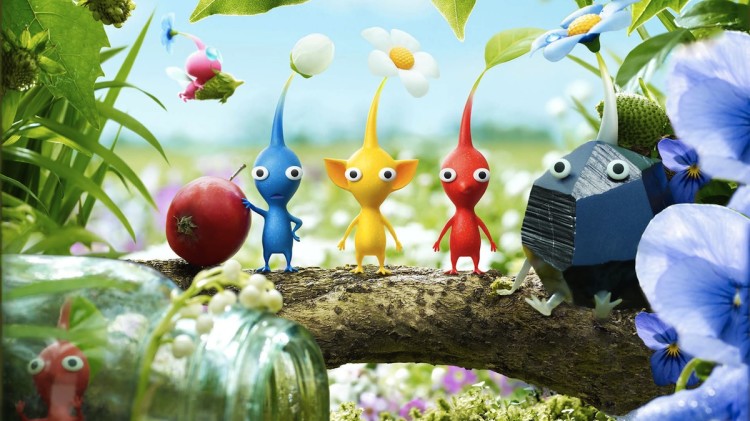 Assuming control over three brave space explorers – Alph, Brittany, and Charlie, Pikmin 3 tasks you with embarking on a monumentally important mission to acquire enough food to successfully support your depleted, overpopulated home planet, Koppai, before coincidentally crash-landing and separating your fearless astronauts on the Pikmin-infested planet of “PNF-404”. Utilizing a horde of up to 100 plant-like, subservient extraterrestrials that will unquestionably accomplish your every command – like defeating adversaries, constructing bridges, or even conducting electricity, you must not only regroup with your scattered teammates, but also survive the strange, mysterious planet of PNF-404 long enough to successfully replenish Koppai’s exhausted food supply.

Thankfully, Pikmin 3 incorporates enough new lovable alien creatures to help you on your seemingly overwhelming adventure – including the obstacle-breaking rock Pikmin and the pink winged Pikmin (capable of flying) – as well as reintroduce some long time favorites like the blue (water-safe) and red (heat-resistant) Pikmin seen in the series’ predecessors.

Aside from the engaging strategic atmosphere the single-player campaign is sure to exhibit, Pikimin 3 also offers two local, split-screen multiplayer modes called Mission mode and Bingo Battle that are sure to add an extra dose of longevity to Nintendo’s admirable, exploration-inspiring title.

With that said, set aside your overwhelming work load, free up your jam-packed summer calendar, and reemerge that buried sense of child-like wonder you’ve been continuously repressing as you guide your adorable, loyal Pikimin across a remarkable journey of both discovery and adventure.

With Firaxis’ ambitious remake of the turn-based strategy game, X-COM: UFO Defense (entitled XCOM: Enemy Unknown) releasing last fall to exemplary praise from both consumers and critics alike, it was only a matter of time before 2K Marin’s The Bureau: XCOM Declassified emerged from the shadows once again after its initial 2010 reveal. And honestly, we’re glad it finally did!

Highlighting the formation of the agency during the nerve-racking Cold War era, The Bureau: XCOM Declassified tells the story of special agent William Carter as he is tasked with investigating and thwarting off an unimaginable threat: an extraterrestrial invasion of the United States.

Originally slated as a tactical first-person shooter entitled XCOM, The Bureau: XCOM Declassified has since abandoned its presumably fan-repelling structure in place of a completely revamped third-person, squad-based design that hopes to present at least a few of the same satisfying, thought-provoking battlefield opportunities the classic strategy series is renown for.

If you thought Saints Row: The Third’s constant, carnage-fueled hijinks were ridiculously over-the-top, just wait until you experience what the crazed developers at Volition have in store for the absurdly-entertaining series’ latest iteration.

Expanding on the ridiculous resume your fully-customizable Saints member has already acquired, Saints Row IV eagerly promotes you into the extremely powerful position of being the President of the United States before an immediate invasion from a race of extraterrestrials – called the Zin – leaves your presidential backside – along with the rest of the Saints gang – captured and, eventually, trapped in a virtual-reality simulation. Though confined within a digitized prison of sorts, your notoriously violent protagonist is far from helpless as you traverse the corrupt, dysfunctional rendition of Steelport’s alien-infested streets.

While you still have excess to the franchise’s more conventional, mayhem-causing options – such as the new head-swelling Inflate-O-Ray, the party-starting Dubstep Gun or even the game’s traditional assortment of corpse-producing weaponry to name a few, Saints Row IV’s biggest draw is the series’ new-found focus on superpowers – which Volition has expanded upon since Saints Row: The Third’s DLC “The Trouble With Clones”, going as far as to integrate these superhuman abilities into the game’s core design in order for them to be utilized more elegantly during gameplay.

Regardless of how you choose to mercilessly exterminate your otherworldly captors – either though more traditional run-and-gun means or by utilizing reality-distorting superpowers like telekinesis, super strength, and freeze rays, Saints Row IV has the potential to be one of the craziest, most humorous chapters ever to grace the Third Street Saints saga.

Acting as a direct sequel to 2010’s Splinter Cell: Conviction, Ubisoft Toronto’s Splinter Cell: Blacklist features the return of the lethal, ex-Third Echelon agent Sam Fisher as he, and his newly-established Fourth Echelon team, are tasked with thwarting off “The Engineers”: a twelve member terrorist group that has initiated a countdown of increasingly-rapid attacks on United States assets called the Blacklist.

As Sam Fisher, the world’s most deadliest operative, you control how you approach each dynamic gameplay scenario by choosing to either infiltrate enemy-infested environments utilizing the series’ traditional, stealth-based techniques or ditching them altogether for more violent, action-orientated tactics.

Regardless of which method suits your fancy, however, Splinter Cell: Blacklist introduces a few brand-new game mechanics and tools aimed to properly accommodate to your specific play-style. For instance, the new “Killing in Motion” mechanic allows wannabe action-heroes the welcome opportunity to highlight targets and execute them in quick succession while on the move, delivering an adrenaline-pumping cinematic feel to Splinter Cell: Blacklist that’s sure to empower you. Franchise traditionalists aren’t excluded from all the excitement either, with Ubisoft Toronto introducing over ninety different takedown maneuvers as well as a few brand new weapons and gadgets – such as a deadly crossbow with interchangeable bolts or the Tri-Rotator: a remote drone that can be utilized to mark hostiles and perform other upgradeable abilities during the course of the game – to add to Sam’s vast, series-spanning arsenal.

With plans to return the Spies vs. Mercs multiplayer mode that was surprisingly nonexistent in Conviction and the welcome inclusion of fourteen ambitious cooperative missions to dive through at your leisure, Splinter Cell: Blacklist seems fully capable of delivering a satisfying, franchise-worthy experience when its anticipated release date finally approaches.

The creative minds at Grasshopper Manufacture are once again bringing to fruition the imaginative vision of Suda 51 (Lollipop Chainsaw, Shadows of the Damned) through the highly-anticipated release of Killer is Dead: an ambitious, new IP that maintains the same visual and conceptual essence of stylish action games such as Killer7 and No More Heroes, but intelligently infuses these similar game elements with a dash of inspiration from Ian Fleming’s insanely-successful James Bond novels.

Assuming the role of an extremely-talented executioner named Mondo Zappa, you’ll be tasked with eliminating incredibly dangerous targets – such as criminals, assassins, and terrorists – that your employer, the Bryan Execution Firm, assigns to you while simultaneously traversing Killer is Dead’s futuristic, cyberpunk world.

Following Suda 51’s knack for outlandish action, Killer is Dead also features a dynamic combat system that allows Mondo to chain combos together and deliver devastating execution attacks utilizing both his upgradeable, cybernetically-enhanced left arm – which can be altered and converted into various forms of weaponry – and his katana-wielding right arm in order to brutally annihilate his unfortunate adversaries.

Sure to be filled to the brim with thought-provoking, imaginative content – like an antagonist who utilizes stolen musical talent for his own villainous means or a chase-sequence-turned-boss-battle that has you pursuing a tiger-mounted yakuza named Hamadayama, Killer is Dead seems fully capable of elevating both Grasshopper Manufacture and Suda 51’s reputation, while also satisfying anxious gamers awaiting a fresh, new experience amongst the usual assortment of annual sequels.

Serving as a prequel to Lost Planet: Extreme Condition, Spark Unlimited’s Lost Planet 3 returns avid Akrid hunters back to the deadly, icy tundras of the planet E.D.N. III as newcomer, Jim Peyton: a colonist and Utility Rig operator accepting hazardous mining assignments from Neo-Venus Construction (NEVEC) in hopes of recovering some precious Thermal Energy, and returning the valuable energy source back to his home planet, Earth – where his loving family anxiously awaits his arrival.

Unlike past predecessors in the series, Lost Planet 3 will feature a narrative-driven story structure that can be completed at your leisure as you explore treacherous environments, obtain and fulfill side-quests from other occupants, and purchase equipment upgrades via hard-earned Thermal Energy – which is now a form of currency instead of a vital, life-saving resource.

While part of Lost Planet 3 will undoubtedly force you to endure the unpredictable weather conditions on E.D.N. III, the indigenous Akrid creatures that inhabit the mysterious terrain are still your greatest threat while exploring and completing assignments. Fortunately for you, Jim Peyton can exterminate them by either resorting to standard, third-person run-and-gun maneuvers or by effectively utilizing his Utility Rig – and its assortment of interchangeable tools – to get up-close-and-personal with any hostile Akrid unlucky enough to impose on his territory.

Featuring a full set of potentially engaging multiplayer modes to accompany the cinematic, single-player experience, Spark Unlimited seems driven to return the series back to its frostbitten roots while simultaneously incorporating enough fan-pleasing additions to attract those who were disappointed with Capcom’s mediocre entry, Lost Planet 2.