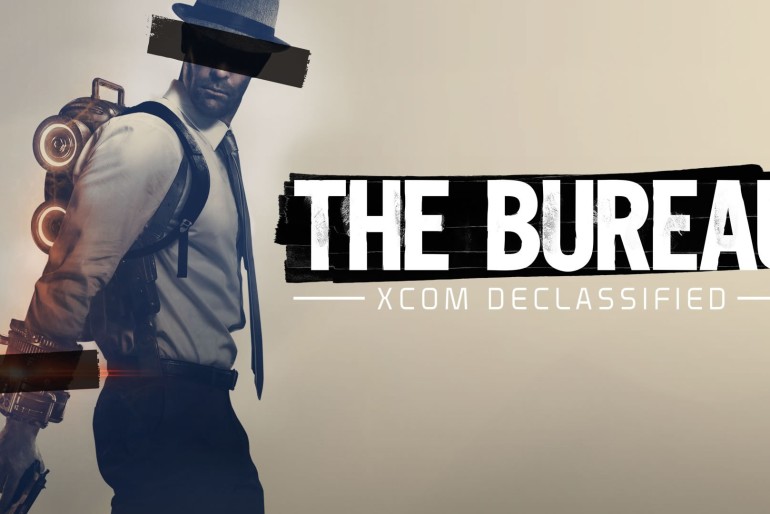 Initially revealed at E3 2010 as a FPS reboot of the beloved PC franchise X-COM – incidentally before Firaxis announced their now-successful turn-based strategy game XCOM: Enemy Unknown (a reboot of 1994′s X-COM: UFO Defense), 2K Marin’s original vision for XCOM suffered from numerous delays, the on-going threat of cancellation, and even an apparent identity crisis during its development cycle before finally reemerging from the cold, uninviting confines of videogame limbo as a reinvigorated, third-person squad-based shooter promptly renamed The Bureau: XCOM Declassified.

While it might always remain a mystery whether this drastic design overhaul was initiated in hopes of potentially gaining the approval of the classic strategy series’ more vocal diehard enthusiasts, one thing’s for sure: 2K Marin has successfully implemented enough thought-provoking tactical opportunities and intriguing – though not necessarily innovative – concepts into the core of The Bureau: XCOM Declassified’s prequel-based premise to make up for its noticeably apparent faults and obvious shortcomings.

The Birth of XCOM

Despite the inclusion of “XCOM” in the title, we urge you not to dive into XCOM Declassified with the pre-determined expectation that 2K Marin’s final product is merely a re-envisioning of Firaxis’ Enemy Unknown in third-person shooter form. As it turns out, XCOM Declassified is essentially an entirely different experience, departing from the established franchise’s usual strategic, turn-based premise (though it does incorporate some hints of the genre’s standard gameplay mechanics) with the sole purpose of highlighting the initial development of the extraterrestrial-thwarting XCOM organization by guiding you through an action-packed, narrative-driven campaign.

Set during the 1960s – a time where military confrontation between the United States and the Soviet Union seemed like an inevitable possibility, you’ll assume the role of William Carter, a no-nonsense ex-CIA agent whose driven to his alcohol-dependent state due to the tragic death of his family. Recruited into the top-secret XCOM division after the mysterious briefcase he was assigned to deliver is opened – predictably triggering an increasingly dire chain of events that includes a wide-scale invasion on American soil, Carter soon finds himself thrust smack dab in the middle of an extraterrestrial war against the Mosaic, an alien species who seems more hell-bent on exterminating the human race than preserving it. With your unearthly adversaries invading many of the country’s rural farms, small towns and other populated environments – which are properly decorated in a commendable 1960s aesthetic, along with the possibility of wide-spread panic hovering dangerously in the balance, XCOM Declassified leaves the entire fate of humanity – and the complete annihilation of these extraterrestrial invaders – in the hands of both you and your highly-trained team of agents.

As previously mentioned, XCOM Declassified’s setup holds its similarities to Enemy Unknown on its sleeve without feeling like a blatant attempt to rip off Firaxis’ successful reboot. While your no longer a commander in charge of the XCOM division – which means no more guiding the research, engineering, and the overall structure of the organization itself, being Chief Field Agent William Carter does allow you some familiar responsibilities including recruiting new agents, selecting specific missions from a computerized map layout, and even strategically coordinating your fellow agents on the battlefield. With that said, agent customization – including selecting new names, clothing colors, and equipment for your teammates – and permadeath make a return as well, though the latter strangely only applies to the hand-picked squad that accompanies you into battle. If you bleed out due to a well-placed headshot or a perfectly-thrown grenade, it’s still game over for you in XCOM Declassified’s war-torn universe.

“…XCOM Declassified’s setup holds its similarities to Enemy Unknown on its sleeve without feeling like a blatant attempt to rip off Firaxis’ successful reboot.”

As it turns out, Firaxis’ Enemy Unknown isn’t the only game XCOM Declassified takes noticeable influence from. Aside from the notable combat and cover mechanics 2K Marin has borrowed from successful third-person shooters such as Gears of War, perhaps the most obvious inspiration XCOM Declassified showcases comes from the magnificent sci-fi series Mass Effect in the form of a squad-managing combat wheel known as “Battle Focus”. Serving as an invaluable asset on the alien-infested battlefield, Battle Focus practically halts time in order for you to properly coordinate flanking maneuvers, mark life-threatening targets, and activate class-specific abilities that are unique to both you and your fellow secret agents. As gimmicky as this gameplay mechanic may sound, its integration into the core of XCOM Declassified’s combat experience gives the title a delicious tactical flavoring that incorporates strategic, turn-based-reminiscent tactics into an otherwise by-the-books third-person shooter.

Unfortunately, XCOM Declassified leans a little too heavily on utilizing Battle Focus to survive the vicious onslaught of your extraterrestrial enemies, especially when it seems to be the only thing postponing your relatively half-witted teammates from becoming an annoying detriment to the mission at hand. Without proper coordination and hand-holding guidance, your squad of “trained” agents will single-handedly attempt a frontal assault on enemy targets, no matter how dense these alien forces may be, while occasionally exemplifying the intelligence of sleep-deprived chimpanzees. Sure, they may prove their worth by reviving your downed backside during intense skirmishes or even properly utilizing pop-in/pop-out tactics successfully at times, but unless you want to hear the nerve-rattling cries “Medic!” or the obvious “I’m down!” ad nauseum during Muton-filled engagements, then we highly suggest utilizing the strategic capabilities that the Battle Focus mechanic graciously offers you.

“Unfortunately, XCOM Declassified leans a little too heavily on utilizing Battle Focus to survive the vicious onslaught of your extraterrestrial enemies…”

Without proper experience integrating XCOM Declassified’s command-delivering combat wheel into each action-packed battle, however, the initial confrontations you face during the roughly 10 to 12 hour campaign can prove somewhat frustrating. Some of this can be contributed to the game’s sluggish start, where you’ll soon learn that you must continuously dictate every one of your squad member’s moves in order to properly avoid the inevitable mad squat-dash – Gears of War-style – to revive them. However, even directing your fellow agents to makeshift cover points doesn’t necessarily mean they’ll stay there and, while that’s great news for when the enemy attempts well-coordinated flanking maneuvers, sometimes it also means rushing haphazardly to their aid in the heat of battle. Add in the obvious fact that, despite the difficulty, extraterrestrial forces are unforgivingly tough to kill – even more so when you notice aiming is a bit stiff compared to other third-person offerings, and early skirmishes can create the illusion that XCOM Declassified just isn’t worth the effort.

Thankfully, that initial assumption begins to dissolve the more you dive into XCOM Declassified’s goo-soaked extraterrestrial engagements, mostly due to the abilities you gain as both Carter and his fellow secret agents level-up from continued experience in the field.

Depending on what class your selected XCOM recruits are – either Commando, Support, Recon, or Engineer, continued use of these agents will allow you to obtain access to a number of tide-changing abilities to utilize on the battlefield including alien-smoldering plasma fields, bullet-absorbing shield spheres, devastating artillery strikes, and deadly rocket turrets to name a few. Perhaps the most helpful (and downright fun) abilities are saved specifically for your own hero, allowing you to lift enemies telekinesis-style for a short duration, summon hovering drones to provide aid on the battlefield, or even utilize mind-control to influence even the most intimidating baddies to turn on their allies. Ultimately, it’s when you finally max out the level caps for both you and your devoted squadmates – which is 10 for your hero and 5 for recruited agents – that combat becomes a truly exciting experience, filled with enough tactical opportunities to ensure that XCOM Declassified isn’t just another mindless addition to the over-saturated third-person shooter genre.

A Break from the Action

While balancing ability cool-down timers, acknowledging ally and enemy positions, and properly strategizing a successful course of action all serve as the core experience, XCOM Declassified does allow you frequent opportunities to explore the maze-like confines of XCOM’s headquarters and strike up conversations with its inhabitants in between mission segments. Opening up a range of dialogue options via a Mass Effect-reminiscent response wheel, these encounters usually triggered lengthy, sometimes dull conversations that would oftentimes hint at the inclusion of interactive, decision-guided discussions, but failed to properly exhibit any meaning to the choices you would make throughout them. Sure, sometimes these drawn out interactions between brilliant scientists, top-notch agents, and inventive engineers organically opened up mini-objectives called Investigations that helped make these conversations seem slightly worth the effort, but we couldn’t help feeling like these unique opportunities for intriguing character development, meaningful dialogue options, and even possible alternative endings (that could have easily elevated the game’s narrative to new heights) were noticeably underutilized throughout the entire duration of the game.

Besides conversing with other occupants, the inner dwellings of XCOM’s secret organization also contains the game’s United States-themed mission hub, where you can partake in both major and minor operations or even select specific agents to complete objectives via XCOM Declassified’s Dispatch Missions. Giving your inactive recruits the welcome opportunity to stretch their virtual legs, so to speak, Dispatch Missions follow a complexity-based system that requires you to properly select agents for each assignment that either match or exceed the recommended level required to successfully complete the objective. Similar to the Assassin’s Creed series’ guild management system, these minor diversions ended up lacking the tactical quality the rest of the game continuously exemplified, and instead only entailed that you simply satisfy each mission’s numeric requirement (or in other words, solve basic addition) in order to complete it victoriously. While finishing these simple operations consistently rewarded us with new perk-like backpacks to equip and more experienced field agents to deploy on the battlefield, we were ultimately disappointed by the extreme lack of strategic options offered throughout each integrated Dispatch Mission.

Despite some noticeable issues – including minor environmental pop-in, inconsistent voice acting, and occasional sound effect hiccups, XCOM Declassified’s most notable problem relies heavily on unexplored gameplay and narrative opportunities that could have easily transformed an entirely good experience into something truly remarkable. While XCOM Declassified does eventually hit its stride towards the middle of its relatively lengthy campaign and showcase the confidence that should have been exhibited from the game’s initial start, we can’t help but receive the impression that, given more time to fine-tune and polish its weaker aspects, 2K Marin’s re-imagined third-person shooter could have easily carved out a true, unfaltering identity to call its own.