Let me set the scene. It’s 1999. I was a happy-go-lucky lad with a Nintendo 64, amazed by the bright graphics and colours. The scariest thing that had happened so far was Zelda freezing in the water temple (irony?). I visited my friend’s house. He had a demo disk for the PS1. We played a demo called Silent Hill. I felt a sense of pure terror. I fell in love.

Apparently, ‘Survival horror is dead’ – That’s what most gamers claim. The glorious days of the genre are long gone. Fans lament the repeated butchering of their favourite classic franchises, such as Silent Hill and Resident Evil, and blame the loss of beloved gameplay styles and unfaithful development teams.

However, there is hope. There are games that exist in dark places, games that have no restrictions and boundaries…

Overall, I would tend to agree with them. The ‘casual’ market is definitely the primary concern for most developers, with motion control games and ‘copy/paste’ shooters littering the shelves of retailers. It’s a shame.

However, there is hope. There are games that exist in dark places, games that have no restrictions and boundaries… games that truly understand fear. The only issue – they are rather obscure. You have to look in the right places, as they are not on the shelves of your local store. They are tucked away online, just waiting to be found.

Let’s talk about a few.

Out of all the games on this list, I would guess this would be the most well known. Afraid of Monsters is a Half Life mod (and therefore a FPS) developed by Team Psykskallar, a 2-person team that is dedicated to creating terrifying survival horror games.

The story itself is rather disturbing. A drug addict, as a last resort, heads to hospital in search of help. Instead, he finds his worst nightmare. Bad times.

A horrific experience from start to finish, Afraid of Monsters is laden with twitching disgusting monstrosities that really make the skin crawl. It’s claustrophobic, dark and depressing – but damn entertaining. A lack of resources ensures that your inventory management has to be top notch, a staple of survival horror.

This one is easy to find, with a free mod download online. All you need is a copy of Half Life on Steam, and that only costs around £5. A must play for survival horror fans. 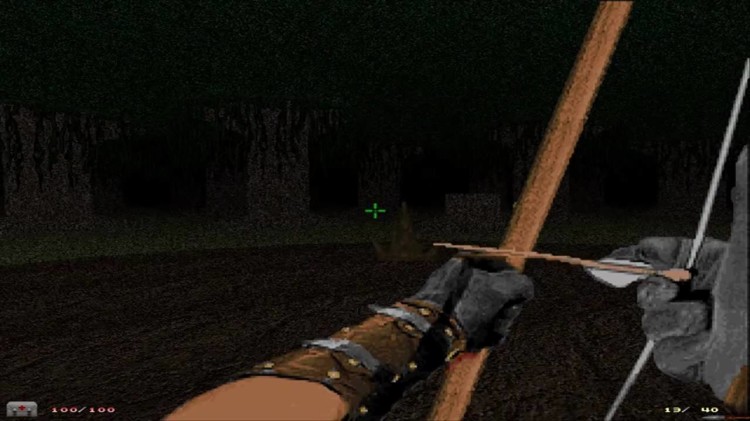 You start in a forest. You have a bow with a handful of arrows, and there are 3 bosses in a large sandbox arena that you must kill. Sounds simple enough? It’s really not.

BOO. That is essentially the core gameplay mechanic with Ghoul’s Forest III, and although it isn’t particularly clever or innovative, it works. Playing this game is a constant feeling of anticipated shock, and you’ll get it by the truckload.

‘Cutmanmike’ modded this game from the Doom 2 engine, so as you’d expect, the graphics are pretty terrible. But when a gigantic skull is teleporting towards you while you’re frantically trying to draw an arrow, it wouldn’t matter if Da Vinci himself painted it.

Honestly, I will warn you – this game is a potent nightmare fuel. And if you happen to kill the 3 initial bosses, a final boss named ‘Yurei’ spawns, and when she finds you… well… you’ll know. Not for the faint hearted.

When Amnesia: The Dark Descent was released, a lot of gamers got very scared. Hiding in a dark corner while a grotesque monster tries to hunt you down – it’s not the best situation.

Interestingly, most of these gamers didn’t realise that there were 3 other games by the same developers released before – the brilliant Penumbra series. But that’s way to mainstream, lets be even more vague! How does a 1992 Korean PC survival horror game sound?

Basically, a male student wants to give chocolates to his lady-friend, so the dumb kid sneaks in to his school at night to plant them. He ends up being pursued by a demonic janitor, whilst succumbing to a number of terrifying hauntings.

I wasn’t sure whether to include this game, as it’s extremely difficult to get hold of. Not to mention foreign. Apparently there are English patched versions floating around in cyberspace (not sure of this), but I know there are plenty of gameplay videos online.

And when I found out they actually had to patch the original build of the game as players thought it was TOO SCARY, I had to include it. Good luck!

Since playing Afraid of Monsters, I got rather excited by the prospect of another survival horror game made by Team Psykskaller. I can honestly say it did not disappoint. Cry of Fear is another Half Life mod, but you really can’t tell. The graphical overhaul is fantastic.

From the intro sequence alone, you know this is going to be a horrible, horrible game. Streets crawling with freaks, boss battles, upgradable weapons, and multiple endings – this game has it all. But the core of the game remains the same – stay alive.

Probably my favourite horror game on this list, Cry of Fear deserves attention. The fact that it’s a free download is both brilliant and baffling. If you play any games on this list, I would urge you to give this one a try.

In the dark, alone and wearing headphones.

SCP: Containment Breach is a game that’s still in its Alpha build, released in April as a free download. It’s still pretty buggy, but it’s expected at this stage. What makes this particular game interesting is the main gameplay mechanic. It’s something that gamers have been dreaming of for a very long time.

There is a ‘blink’ meter. After around 6 seconds, you blink by default. You can manually blink by pressing the space bar. “Its madness!” I hear you cry. Well, it isn’t. When you’re trapped in an underground facility with a creature that can only move when NOT being viewed with the human eye, it’s really quite vital.

Let me explain. You start the game entering a chamber with 2 other guys. SCP – 173 (the ‘creature’) is in this chamber. A voice instructs you to keep your eyes on it at all times. The lights die. As they flicker back on, both of the men are dead, and it’s staring at you.

Don’t blink. For the love of God.

For an Alpha build game, SCP: Containment Breach is brilliant. There are aspects that really mess with you, such as gas-filled rooms that drain the blink meter, and randomly generating maps.

Plus, just to really mess with you, the game cannot be completed in its current form. So it’s not really survival horror, it’s “Sorry, but you’re going to inevitably die” horror.

So there we are, 5 survival horror games that are as terrifying as they are obscure. They are all brilliant for their own reasons, but they definitely all have one similar and repetitive outcome.

Scaring the goddamn hell out of you.